The link between high blood pressure, swelling and insulin resistance.

Why Increased High Blood Pressure Lowers and Swelling gets better on Keto. For Dummies .


I am a person without a medical education, only an amateur who tries to independently understand the functioning of a living organism. In this article I want to try to explain in an accessible way why, with ketogenic nutrition and fasting, high blood pressure usually normalizes. And why the increase in blood pressure is one of the symptoms of the metabolic syndrome. This article does not claim to be a scientific article, so there is not a large number of references to each fact mentioned. But if you need links, let me know. Actually, I had to write on the topic itself, because I did not find this information on the Internet. They asked me why the pressure on keto decreases, I answered, and went to look for links, but for some reason I did not find it. although everyone knows this fact, who is in the subject.


The mechanism for raising blood pressure is very complex, there are several reasons why people develop hypertension. The development of the metabolic syndrome is one of the reasons, perhaps the most common in an industrial society. At least, hypertension is one of the diseases of civilization that is not found in primitive communities. There are other articles on my blog on this subject, for example, http://galinaleb.com/ cancer-civilization-connection /. And switching to nutrition, which treats metabolic syndrome, treats those types of hypertension that are dependent on insulin levels.


From the section of information that everyone knows — when switching to a fatty low-carb diet, especially to a ketogenic diet, a lot of fluid is expelled from the body . No one argues with this, even opponents of the restriction of carbohydrates use this well-known fact to say that there is nothing special in ketosis, so the physiological focus, not losing weight, but just leaving fluid, not fat. Who needs this?

Firstly, of course, not only water is consumed when carbohydrates are limited, because the usual amount of kilograms that leave the body in the first week is 1-5 kg , for the first month 5-10. Of course, a certain amount of kilograms that have disappeared is not guaranteed — we are all different. Of course, the rate of weight loss then decreases, the body tries to prevent sudden changes.

Secondly, leaving excess fluid also has a beneficial effect on health, and it is a marker that insulin levels are lower. Although part of the fluid left the body not because of a change in the amount of circulating insulin, but because it was associated with glycogen, which stores the liver using excess carbohydrates in the diet, and its reserves are depleted when carbohydrates in the diet become low. Glycogen binds a lot of fluid.

The diagram shows how insulin opens glucose into the cell. 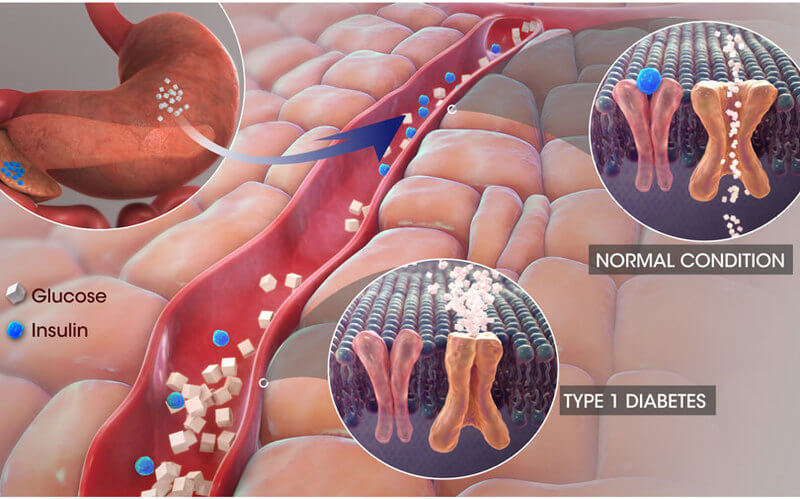 Do we need to lower insulin? Most need it if baseline insulin is elevated, if excess insulin is secreted in response to food. Alas, almost the entire population eating industrial food, after middle age, and someone already in their youth, developed Metabolic Syndrome arising from the development of insulin resistance. Insulin resistance of the body cells is the inability to respond adequately and quickly to the insulin signal, which gives the cells a signal to take glucose from the blood. Insulin is like a key that opens the door to the passage in the shell of a glucose cell. Oganism tries to prevent elevated levels of glucose in the blood if the cells do not hear the insulin that is already in the bloodstream and the glucose level is still high, which means that insulin is released even more. Until it works. After all, the body seeks to prevent an increase in the level of glucose in the blood. As a result of frequent and strong increases in insulin, basal insulin gradually rises as well. This is all the way to developing category 2 diabetes, although many people with metabolic syndrome do not develop diabetes,

What are the consequences? Insulin has many functions in the body, one way or another, insulin affects all types of metabolism throughout the body. High levelsinsulin is associated with increased fat stores and the development of obesity. Since insulin is an anabolic hormone. (Although there are people whose adipose tissue, especially subcutaneous tissue, is resistant to insulin signals, which, unfortunately, does not relieve them of the consequences of the development of a metabolic syndrome that develops faster. As I noticed, skin aging is visually noticeable. About 15 percent of category diabetics 2 do not have excess weight, but their diabetes begins earlier, more complications). An excess increase in insulin levels disrupts the normal metabolism of fats, in the liver, insulin helps to convert glucose to triglycerides, increasing the level of triglycerides. Not for nothing that another marker for the presence of metabolic syndrome is liver obesity. And elevated glucose levels, of course. First during the day, then on an empty stomach.


An increase in insulin also affects the system that regulates the state of the cardiovascular system (insulin acts on the renin-angiotensin-aldosterone system (RAAS) ) , including body signaling systems that regulate blood pressure. This is the main reason why pressure rises with insulin resistance — the hormone aldesterone rises along with increased insulin, which signals the kidneys to retain sodium and water. Which increases blood volume, and blood pressure rises. Thus, it turns out that the restriction of carbohydrates has a much stronger effect on blood pressure and edema than salt in the diet.

An increase in insulin also affects the sympathetic nervous system, causing the heart to pump blood with greater intensity, and the arteries to contract. All this creates an imbalance in the sodium and potassium balance (which increases blood volume), as well as calcium and magnesium (which causes arterial constriction), pathologically increasing blood pressure and increasing the risk of heart disease.

In principle, in the mode of excess growth provided by increased insulin, much grows in the body — papillomas, keratosis, heel roughness increases and elbows and knees darken, cataract develops faster …. But let’s not go too far!


By the time a person stops eating a lot of carbohydrates, everything spins up — insulin goes down, this gives a signal to the hormones of the  renin-angiotensin-aldosterone system (RAAS)  to stop trapping sodium and water, excess fluid and some electrolytes leave the system, blood volume decreases and other changes that lead to a decrease in blood pressure. For some, switching to ketogenic nutrition is enough to successfully control hypertension, but not all. The problem with hypertension can be difficult to solve.

Also, I can not help but mention that occasionally happens during the transition to Interval Fasting, for example, when a person begins to rarely eat ketogenic food, as this diet greatly reduces appetite, and the pressure decreased on keto rises. Not everyone, I repeat, rarely, but I have seen this. Fasting can increase stress hormones. Although usually the transition to a rare diet helps to lose weight more successfully for those for whom it is necessary and difficult. Also, many testimonies of fasting practitioners are known that fasting on the contrary helped normalize blood pressure. Such a situation is a reminder to us all of the complexity of the body and the scatter of individual characteristics. Whatever someone recommends to you, the main person in the supervision of your health is you. Your task is to observe how your body reacts to changes in diet and / or medications.

It is also necessary to keep in mind that it is extremely advisable for hypertensive patients to switch to keto under the supervision of a doctor or adjust the dose of the pressure medicine themselves in accordance with the pressure values, and not take the pill just in case, otherwise the pressure may drop unnecessarily under the influence of drugs not designed for additional effect of diet. on In the first days of the transition to ketosis, it is very advisable to supplement electrolytes — to add food, drink broths, take magnesium chelates, since a lot of electrolytes will go away with the liquid.